Chicks dehydrate at low outside temperatures 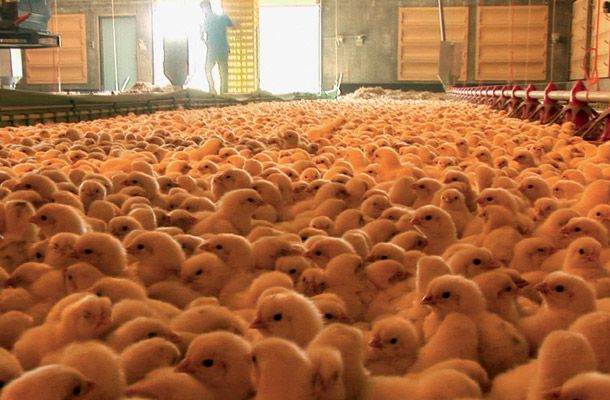 A hatchery manager called me to say that while overall hatchery results were fine, several of his customers were complaining of high first week mortality, irrespective of breeder flock. Local post mortem revealed dehydration as the main cause. There were no indications of yolk sac infection or other bacteriological problems.

Chick take-off normally started at 6.00 am - 510 hours after starting incubation (excluding preheating). There were no long wing feathers, dry legs or too much meconium on egg shells, which would indicate prolonged time in the hatcher. Further investigation revealed that chick-handling, including feather sexing, took six hours. When completed, it was too late to start the 10 hour journey to the customer, so the chicks remained a further 10 hours in despatch. Labour costs precluded changing chick take-off time.

Relative humidity in the chick despatch room was as low as 10 - 25 %, depending on the number of birds placed, despite the fact that the humidifiers in the air preparation room were all activated. However, with outside temperatures of  -20 – -30 °C, this is not uncommon. Psychrometrics illustrate how warming-up cold air to recommended room temperatures produces extremely low relative humidity and evaporation-based humidifiers cannot sufficiently correct this. Steam humidifying is a good, technical solution, but expensive in terms of energy. If its use is limited to the chick despatch room on hatch days, costs can be kept down to an acceptable level.

Obviously low relative humidity during the transportation of the chicks would also contribute to dehydration.

The cost of labour for administering saline solution to the chicks subcutaneously was prohibitive. But water could be supplied, by placing pieces of watermelon and other water-rich fruits in the chick boxes. Alternatively a semi-moist product such as cooked rice could be placed in the chick boxes. This provides both direct and indirect sources of water, as the chick metabolises the nutrients. However chick boxes must be exposed to light for long enough to allow the chicks to feed on these water-rich sources sufficiently.

All the recommended measures produce costs, but dissatisfied customers are inevitably more costly.

The cost of preventing dehydration need only apply during the cold winter season. As soon as outside temperatures rise again, normal levels of relative humidity are more easily restored - and the risk of delivering dehydrated chicks is greatly reduced.