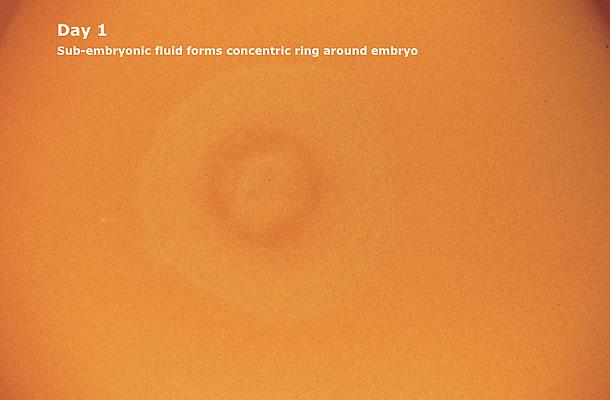 If it comes to discussions on fertility two different definitions are practiced. A true fertile egg contains a well de­­veloped germinal disc (blastoderm), which indicates that the oöcyte, or zygote, was fertilized and an embryo developed during egg formation. Secondly, in the practice of the hatchery fertility is often based on cand­ling, whereby all clear eggs are defined as unfertile and by default the rest of the eggs are considered to be fertile. This second definition of fertility is strictly not correct since clear eggs may contain both truly infertile or they may contain (fertile) embryos that died early.

In hatchery practice problems with fertility are usually first recognized during the candling procedure, when the number of clear eggs is higher than expected. To identify the time and the cause of embryonic death, the hatchery manager may perform an analysis of candled eggs. However, if candling is performed at transfer at day 18, as is often the case, it can be difficult to discriminate between true infertile eggs and eggs containing an embryo that has died before the blood ring stage. This is because membranes from dead embryos degenerate while the eggs are still in the incubator.

By candling at days 7 - 10, it is possible to reliably discriminate between true infertility and early embryonic death for two reasons. Firstly, because embryonic membranes formed during the first days of incubation can still be recognized. Secondly, in clear eggs collected between days 7 - 10, a change in the color of yolk as a result of embryonic activity is clearly visible. The active young embryo transports water from albumen to yolk, which results in a whitish or light yellow ring around the embryo.

The fertile, unincubated egg contains an embryo ( germinal disc or blastoderm) that developed from the fertilized oöcyte (zygote) during egg formation in the oviduct. The oöcyte is the female gamete that floats on the yolk. When the yolk is released in the oviduct, spermatozoa (male gametes) penetrate the yolk membrane, after which only one spermatozoon fuses with the oöcyte to form the fertile zygote. Finally, during egg formation in the oviduct, the zygote develops into the blastoderm, with a recognizable Area Pellucida (AP) surrounded by an Area Opaca (AO) (figure 1a). If for whatever reason the spermatozoa do not reach the oöcyte, the egg remains infertile and the oöcyte will degenerate to form nothing more than a small germinal disc. The infertile germinal disc is visible as a compact white spot with ruffled edges (figure 1b). If hatching eggs are analyzed on arrival at the hatchery, before incubation, any issues with infertility can be communicated with the breeder farm without delay.