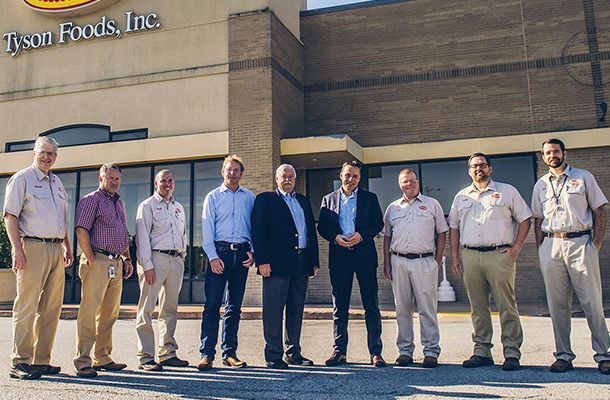 US-based Tyson Foods Inc. has chosen Pas Reform and NatureForm, the world’s only single-source supplier of integrated hatchery solutions, to equip the hatchery of its new chicken production complex at Humboldt in Gibson County, western Tennessee.

The facility will include a feed mill, hatchery, processing plant and related operations to produce pre-packaged trays of fresh chicken for retail grocery stores nationwide. It is expected to process 1.25 million birds per week when it opens in 2020.

Tyson Foods is one of the world’s largest food companies and a recognised leader in protein-based foods, with its headquarters in Springdale, Arkansas. Founded in 1935 by John W. Tyson, it has grown under three generations of family leadership. In 2017 the company had sales of USD 38.3 billion.

The Humboldt project received the go-ahead in January 2018. In the preceding months the engineering teams of Tyson and Pas Reform/NatureForm worked together to specify the project’s scope, calculate technical specifications and model optimal processes for the hatchery.

The hatchery will make full use of Pas Reform’s and NatureForm’s single-source capabilities. The project includes 36 SmartSetPro™-6 setters, 6 SmartSetPro™-3 setters and 39 SmartHatchPro™ hatchers, to bring total weekly capacity up to 1.7 million eggs.

Tyson Foods has also adopted a SmartCare™ Lifetime Services contract, which covers every level of hatchery operations, to deliver an assurance of efficient, uninterrupted performance over the next five years.

In addition to the Humboldt Project, Tyson has ordered 4 SmartStart™ hatchers to be installed this spring. Tyson will be the first major poultry producer in the US to install this type of hatchers, which have the capability of providing day old chicks with moisture enhanced feed, eliminating the need for open water sources in the hatcher.

Steve Warren, President of NatureForm Hatchery Technologies, comments: “This is another milestone for Pas Reform and NatureForm. Since the start of our collaboration in 2014 we have been in frequent contact with Tyson staff, visiting their hatchery operations with our incubation specialists and inviting them to our Pas Reform Academy. This was a great way for us to get in-depth knowledge of the Tyson group. And of course Tyson staff also got to learn about our equipment and our company philosophy.”

Bouke Hamminga, Pas Reform’s Director for International Sales and Business Development says: “Since Tyson is one of the three largest poultry companies in the world, the impact of this agreement will be viewed very positively both in the USA and worldwide.

“We feel that this project helps us to get a major foothold on the US market and internationally as well. We have always viewed our collaboration with NatureForm as a strategic way of gaining substantial market share in the US market and we are doing just that.”

We wish you a wonderful holiday season and happy New Year!