The biology behind egg turning 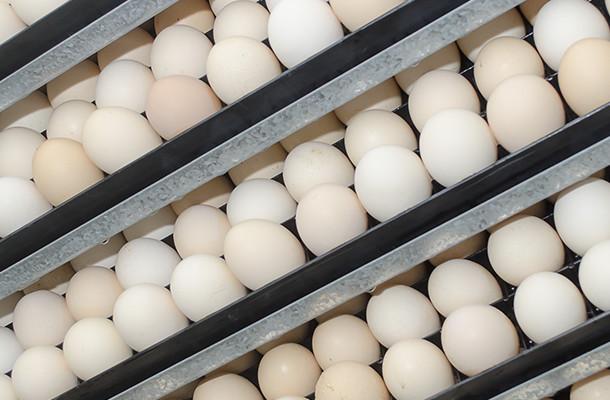 In addition to climate parameters such as air composition and temperature, turning is an important third parameter that needs to be controlled during incubation.

In commercial incubators, hatching eggs are placed in setter trays with the air cell up and turned regularly through angles of 90° or 45° on either side of eggs’ long axis. Historically, arguments for the need to turn eggs frequently were (1) poor temperature distribution in the albumen and yolk and/or (2) the risk of the embryo and extra-embryonic membranes adhering to the inner shell membrane.

From recent research, however, we now understand that turning hatching eggs during incubation is essential for the development of extra-embryonic membranes, including the amnion and the chorion- allantois respectively. Simultaneously, extra-embryonic compartments are filled with sub-embryonic fluid, amniotic and allantoic fluids. Both membranes and fluids are essential for the optimum growth and development of the embryo (reviewed by Deeming 2002 in: Avian Incubation behaviour, environment and evolution); Baggott et al., 2002).

The formation of extra-embryonic membranes and compartments is fundamental for the transfer of nutrients from the albumen and yolk and, last but not least, from the shell to the developing embryo. It is essential that embryonic development keeps pace with the development of the extra-embryonic tissues, so that when the day 12 embryo starts to grow, the yolk lipids are prepared for uptake by blood veins grown into a well developed yolk sac.

If development of the yolk sac membranes and vascularisation lags behind that of the embryo, embryonic growth is limited. Lipids transported by the blood vessels from the yolk need a well developed yolk sac to be metabolized.

If turning fails during the period of sub-embryonic and blood ring formation, the area vasculosa remains small and the total volume of sub-embryonic fluid is decreased. Consequently, failure to turn the egg has a serious and negative impact on the growth of the embryo. If embryos are not turned during days 4-7, nutrient uptake is affected, which delays hatching time and produces increased variability in chick viability. We may confidently conclude therefore, that turning eggs is as important as climate parameters RH and temperature in incubation, not only for optimising embryo quality, but also in order to achieve a narrow hatch window.