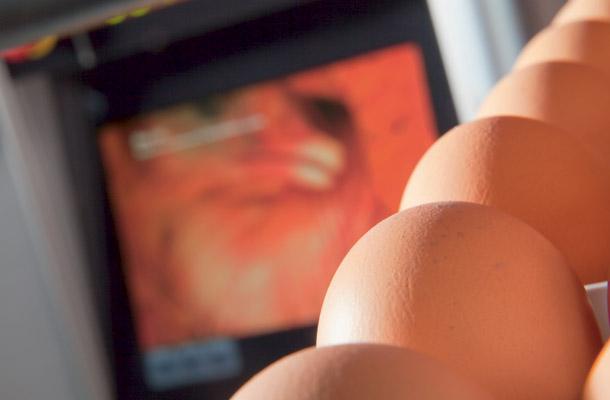 Reducing ventilation at the start of incubation generally avoids the inlet of cold air. Because moisture is trapped in the closed incubator, the humidifier cold spot is also absent. Consequently closing the valves during the first days improves temperature homogeneity and heat transfer to the eggs, producing a good, uniform environment for continuing embryonic development – and an ideal start for achieving a narrow hatch window.

However at the same time, hatchery managers are aware that total weight loss may be challenged if ventilation is closed for too many days, with the result that relative humidity levels become too high. This is especially true in climates typified by high humidity.

For optimum chick quality, high (above 75%) relative humidity during the first seven to 10 days should be avoided, because this forces compensatory weight loss during the last days of incubation through low settings  (40% or less) of relative humidity. The latter may affect hatchability and chick quality, because the very dry atmosphere during the final days in the setter will force evaporation from the allantois cavity and embryonic tissues like the skin and legs.

It is generally accepted that eggs should lose 11-13% of initial weight during the first 18 days of incubation, for optimum hatchability and chick quality. Hatching egg weight loss is a result of the continuous evaporation of water from the eggs - and inseparable from the function of ventilation, which facilitates the removal of moisture from the incubator.

Since eggshell is porous, the release of (water) vapour from the egg starts immediately after laying, continuing throughout egg handling, storage and the incubation of the eggs. Evaporation from the eggs - and thus weight loss - is mainly a physical process, driven by differences between internal and external vapour pressures. Internal vapour pressure is mainly represented by the saturation vapour pressure in the air cell, which increases as temperature increases - thereby facilitating increased evaporation (weight loss) at a certain relative humidity. In environments with high humidity, weight loss is limited. So for example if relative humidity in the setter reaches 75% , the daily weight loss of the eggs is only half of the weight lost from eggs placed in a setter with 50% relative humidity.

We can conclude, that closing ventilation for the first three to four days of incubation is beneficial, supporting uniform embryonic development for each egg in the incubator to facilitate a narrow hatch window. Subsequently, ventilation should be opened gradually to support optimum daily weight loss, by the continuous removal of moisture from the eggs.

For setters with programmed valve positions: