When and how to transfer eggs to the hatcher 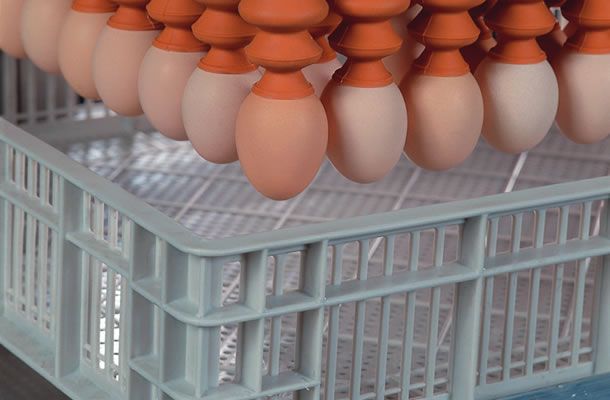 Traditionally, setting and hatching occurred in the same incubator, with new eggs being set twice weekly. Generally, hatching baskets were situated at the bottom of the incubator, where temperatures were lower. But this system was not successful in terms of maintaining egg hygiene, as the fluff from hatched chicks contaminates unhatched eggs, and the system did not facilitate proper cleaning and disinfection. It was also impossible to create optimal climatic conditions for eggs of various setting dates and the newly emerging chicks at the same time.

Today, it is common practice to place eggs in the setter for the first 18 days, before transferring them to the hatcher for the last three days of incubation. Generally, this occurs between the embryonic ages of 17 days and 12 hours and 18 days and 12 hours, to coincide with the normal working schedule of the hatchery (see table), whereby hatchers are used twice a week.

In this scenario, incubation time is measured from the (assumed) moment the eggs reach optimum internal tempe­rature for embryonic development, and not from the moment the eggs are placed in the mulistage setter or from the moment the single-stage setter is switched on. Depending on the setting system, heating capacity and initial egg temperature (in relation to the method and duration of preheating) corrections must be made if one wants to express incubation times from machine start-up. For example, in the table, corrector time equaties to six extra hours.

Fluctuations in production planning may dictate transfer either earlier or later than in normal practice.

Transfer to the hatcher can happen as early as 15 days (= 360 hours of incubation), as there is no evidence to suggest that stopping turning after 15 days of incubation in domestic fowl has any ­deleterious effects on development and hatchability (Deeming, 2002). However, it is our ­practical experience that transferring to the hatcher at this moment can reduce ­hatchability by 0.5 - 1 per cent.

Transferring to the hatcher should not occur after 19 days (456 hours) of incubation, because disturbing the eggs at this time adversely affects the act of internal pipping.

Working schedule for hatchery with 4 hatch days per week, whereby weekend workdays are avoided. The 1sthatch and 3rd hatch are in the same hatchers. Incubation time is measured from the moment internal egg temperature has reached optimum incubation temperature.

Too many clears? Break-out analysis needed!

To candle or not to candle, that’s the question...