Maintaining the ideal climate for chick handling and transport 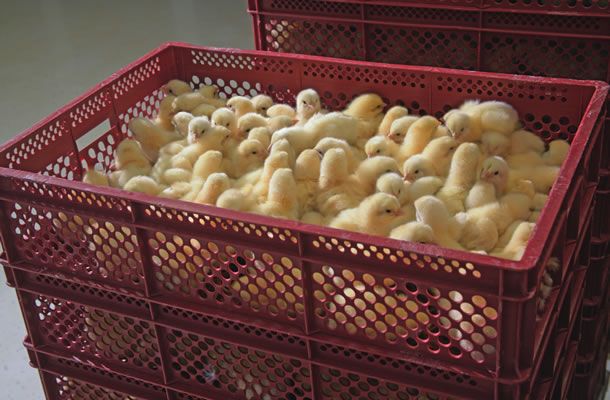 Good post hatch performance and low first week mortality can best be expected from chicks kept in ideal conditions between leaving the hatcher and placement in the farm.

When pulled, chicks leave an ideal climate, with hatcher temperature of approx. 97.5 - 98 ˚F (36.4 - 36.7 ˚C), relative humidity at around 60 per cent and air circulating at high speed. Movement to the handling room exposes the chicks to a very different climate. And boxed chicks are often kept for some time in the chick despatch room, before being transported to the farm.

Normal rectal temperature for a day-old-chick is 40 - 40.5 ˚C (104.0 - 104.9 ˚F). Newly hatched chicks are dependent on climatic conditions to regulate their body temperature for the first few days. And good ventilation will drive excess body heat out of the chick boxes, while also preventing a build-up of carbon dioxide.

Chick behaviour is the best indicator of climatic conditions during chick handling and transport. Under ideal conditions, day old chicks breathe quietly through their nostrils, losing only a little water. They spread evenly in the boxes, make little noise and are relatively inactive.

If carbon dioxide levels are too high, the chicks will gasp for air and try to stick their heads out of the chick boxes. This blocks the passage of air into the boxes, so compounding the problem.

When environmental temperature is too low, or there is too much draught, the chicks huddle together to try to maintain body temperature. Chicks are especially prone to chilling if pulled too early (‘wet chicks’) or after spray vaccination.

Recommended post hatch climate settings are shown in the table below. Specific recommendations include: