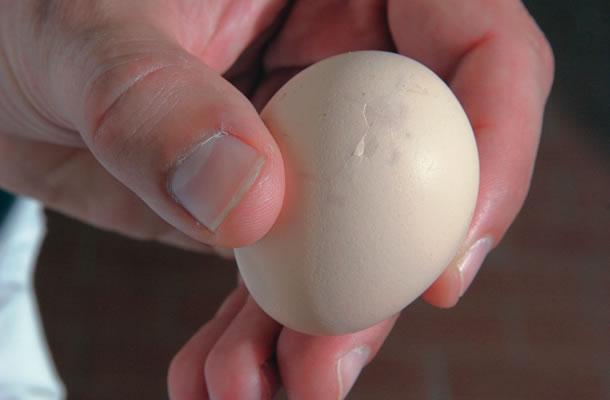 In general, good quality eggs are selected and placed for incubation. This means that only clean eggs with shell intact should be placed on the setter trays. Dirty or floor eggs and eggs with visible cracks are removed and not placed. Eggs with hairline cracks might often not be recognised and will, consequently, be placed in the setter trays and incubated.

In cracked eggs, the shell is broken and the underlying membrane is ruptured - leading to dehydration and the death of the embryo. However eggs with undamaged membranes but broken shells are defined as having hairline cracks - and these are often placed because unless candled, they look like good quality eggs.

A study of the incubation of good quality hatching eggs versus those with hairline cracks produced the results shown in the summary. In this experiment, eggs from five commercial flocks of various strains were candled and an equal number of hairline-cracked and normal eggs were incubated for 21 days. Eggs were identified as having a hairline crack if the crack was visible by candling, but not apparent when examined normally.