Brooding of chicks - a matter of care 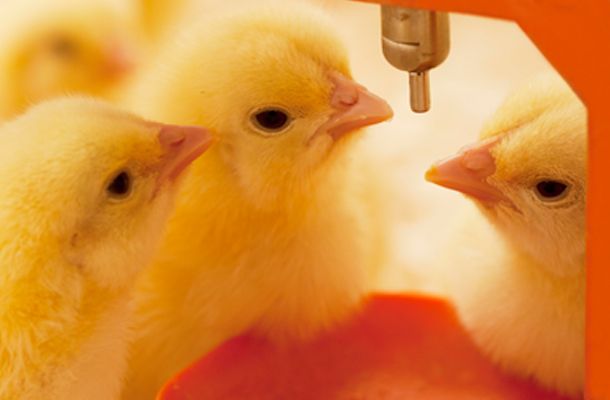 Good breeder and hatchery management, together with an optimised incubation process and transport conditions, will deliver a batch of good quality, uniform day old chicks. However this alone is no guarantee of successful post-hatch performance.

Of the many factors that have an impact on this, chick reception and brooding management are probably the most decisive. It is difficult to recover from a poor start during the first days, especially when, as is the case for broilers, the production period is short - or in the case of pullets, this will lead to a lack of uniformity.

Preparing the house for the chicks’ arrival is an important aspect of brooding management. It is obvious that cleaning and disinfecting the house and equipment thoroughly between flocks is critical: scheduling the maximum number of production cycles a year should not ever compromise attention to proper cleaning and hygiene.

Perhaps not so obvious, is the benefit of allowing sufficient time to warm the house thoroughly, not only to warm the air, but also the floor underneath the litter. The floor should first be fully dried, with floor litter not being spread until a few hours prior to chick arrival, to promote a fast, uniform heat-up.

This attention to temperature in the house is essential, because the chicks’ thermoregulatory systems are not yet fully matured. Their body temperatures largely depend on environmental temperature, and if attention is paid to the temperature of the air only, the chicks can still become undercooled if too much heat is transferred to a cold floor through their legs or body or when exposed to draught. Once undercooling has occurred, the chicks huddle, lie down and remain inactive instead of seeking water and food.

Making the house too warm is not only costly in most instances, but also leads to risk of dehydration as a result of panting, especially in combination with low relative humidity. Again, the chicks will become inactive, resulting in so called “non-starters” and increased first week mortality.

Getting the chicks to drink and eat as soon as possible after arrival is a major target for the successful farm manager. Attention to detail in preparing the house, such as providing extra feed close to the drinkers (e.g. on special paper placed under the drinking nipple lines) or extra drinkers close to the feeders, and adjusting the level and pressure in the water lines, does pay dividends. In combination with a well-illuminated house, the chicks quickly find food and water.

Subsequently, checking the chicks’ behaviour regularly - including body temperature and crop fill – allows for the observation of mistakes or oversights during those important first days in the broiler- or rearing-house.