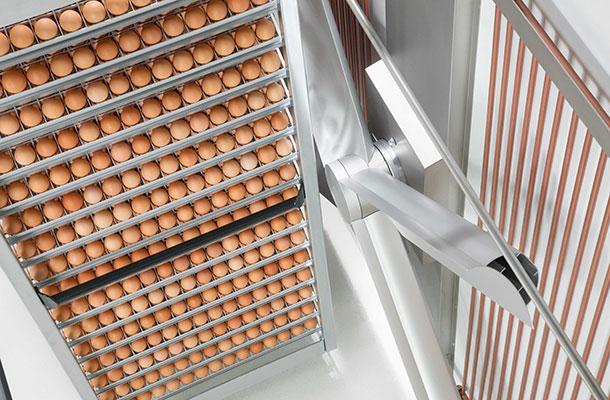 Single stage setters and hatchers are designed to be used at full capacity. Their heating and cooling system and maximum air refreshment rate (= ventilation capacity) are calculated on fully loaded incubators.

Because there is no limitation from heating, cooling and the refreshment of air, it is logical to expect partially loaded setters and hatchers to function correctly and yield good hatchability and chick quality. However, this is only true when the incubator is loaded with a good understanding of its working principles – and particularly of the purpose and effect of airflow.

The fan in the setter and hatcher usually has a double function. In combination with the position of the in- and outlet- valve, it draws in fresh and expels used air. But it should also drive a uniform airflow over all the eggs in the incubator, to ensure that a homogeneous micro-climate is created for the developing embryos.

Even when inlet and outlet valves are fully closed, the airflow generated by the fan re-circulates the air within the incubator. After being acclimatized by the machines’ heating or cooling device, air should move equally over all eggs, either heating the eggs to optimal embryo temperature, or removing the metabolic heat produced by the developing embryos. To guarantee uniform temperature distribution and prevent areas of high carbon dioxide concentration, both of which may be detrimental to embryo development, ‘dead zones’ in the incubators are to be avoided.

Air will always travel the easiest route. In a fully loaded incubator, there is no easy route and the air is effectively forced over the eggs with equal difficulty, which optimises airflow.

When partially filled setters and hatchers are not loaded correctly according to the manufacturers’ instructions, airflow over the eggs is distorted and becomes inconsistent due to the presence of larger, empty spaces inside the incubator. The result of this imbalance is cold or hot spots and areas that lack fresh air. This principle also applies to partially loaded setter trays, eg. after a 10-day candling procedure, and to hatcher baskets.

The following are general guidelines: