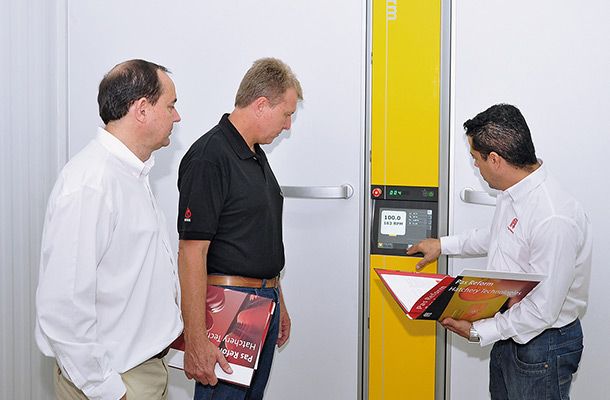 Aviagen is part of the EW Group, a key player in broiler genetics worldwide. Two years ago it established the 4,000m2 hatchery on a greenfield site in Brazil’s São Paulo state, installing Pas Reform’s most advanced single stage incubation technologies to create a truly state-of-the-art hatchery that focuses on quality, sustainability and energy efficiency.

In this second phase of development, Aviagen’s hatchery will be expanded with six SmartSetPro™-1, six SmartSetPro™-2 incubators, nine SmartHatchPro™ hatchers and a semi-automatic egg-transfer machine. Pas Reform do Brasil has supported the development of the expansion with engineering, technical specifications and design, to further optimize efficiency and sustainability.

The setters are equipped with Adaptive Metabolic Feedback™ (AMF™), a unique functionality that adapts the incubator environment specifically to the metabolic needs of the embryos. The Energy Saving Module™ (ESM™), delivers substantial energy cost savings and improved sustainability. The hatchers are also equipped with SmartWatch™, to deliver fine control for a reduced hatch window.

Aviagen has been supplying the region with day-old grandparent and parent stock chicks for several decades. In 2007, the company bought the assets of Agroceres Avicultura to form Aviagen do Brasil Ltda and was later renamed to Aviagen America Latina Ltda in 2010.

Today, Aviagen America Latina is one of Aviagen’s main production bases, strategically located in a region that is easily accessible to major highways and close to Viracopos International Airport, Campinas. This facilitates the supply to large companies in Brazil and other countries in Latin America, in line with Aviagen’s ambitions to support expansion in the supply of high-quality, day-old chicks for the South American market.

Anselmo Micheletti, Aviagen America Latina’s Technical Manager, says: “We have been collaborating with Pas Reform throughout our hatchery development programme in Brazil. Therefore it should come as no surprise that our choice of the partner for this second phase of expansion was Pas Reform again.

“Pas Reform’s SmartPro™ hatchery technologies mirror our vision of quality and efficiency. They were the logical choice when we launched Aviagen’s green field hatchery in 2016 – and they remain the right choice for us as we look to the future.”

Artur Schlick, Operations Director for Pas Reform do Brasil, comments: “Aviagen is an ambitious company. It has been a privilege to continue our work with them on this prestigious, state-of-the-art development project and support their continued growth in South America and beyond.”